Fruit crisps are a great way to feature seasonal produce in a dessert that is easy to make and low in added sugars. This is a non-traditional spin on the more traditional apple crisp.

I love making crisps because they take minimal effort, and I can bake them while we’re eating dinner. Bonus: They make the house smell amazing!

In the summer, I use fresh berries, but good quality fresh berries are not an option in New England in Winter!  So, pears and cranberries it was!

I used Anjou pears, but you could use any variety. I think Asian pears would be amazing in this. The cranberries were bought fresh and then I froze them, because, unless I’m making sauce, I generally only use a handful. 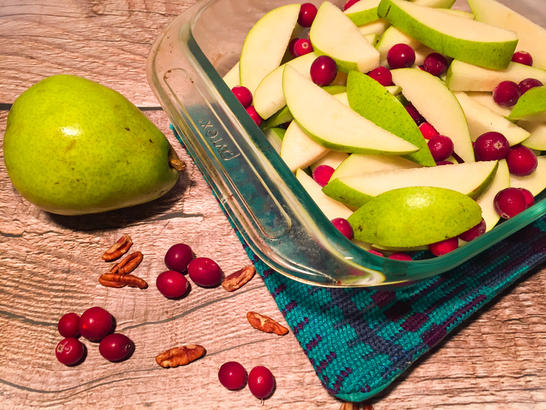 For the topping, I started with melted butter. I like Kerrygold’s grass-fed butter, or Kate’s, which is a local (Maine) brand. I mixed in ginger, cinnamon, ground pecans (I gave them a buzz in my Nutribullet, which does an awesome job of grinding nuts), and some local NH maple syrup. I spread that on top. 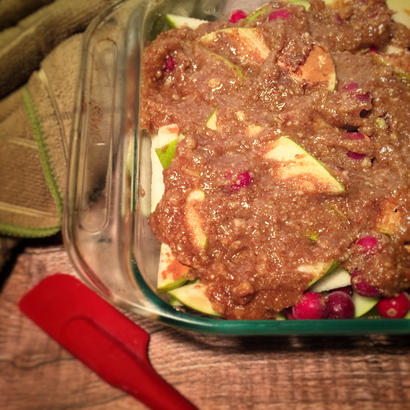 Then I popped it in the oven and baked it for about 45 minutes, until the fruit was softened and the top was nice and golden. 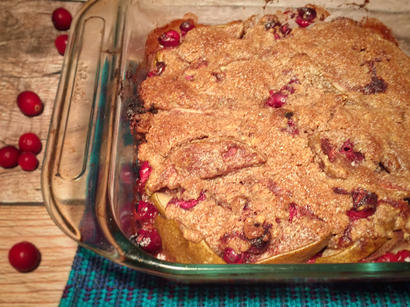 My whole house smelled like Christmas, prompting the man to ask what deliciousness I was cooking.

Of course, fruit crisp is best served with ice cream. I used Ben & Jerry’s Dairy-free Cherry Garcia. You could also top with some fresh whipped cream or yogurt for a lower-sugar treat.

With a full serving of fruit, 7 grams of fiber, less than 25 grams of net carbs, and plenty of healthy monunsaturated fat, this makes for a much healthier holiday dessert option. 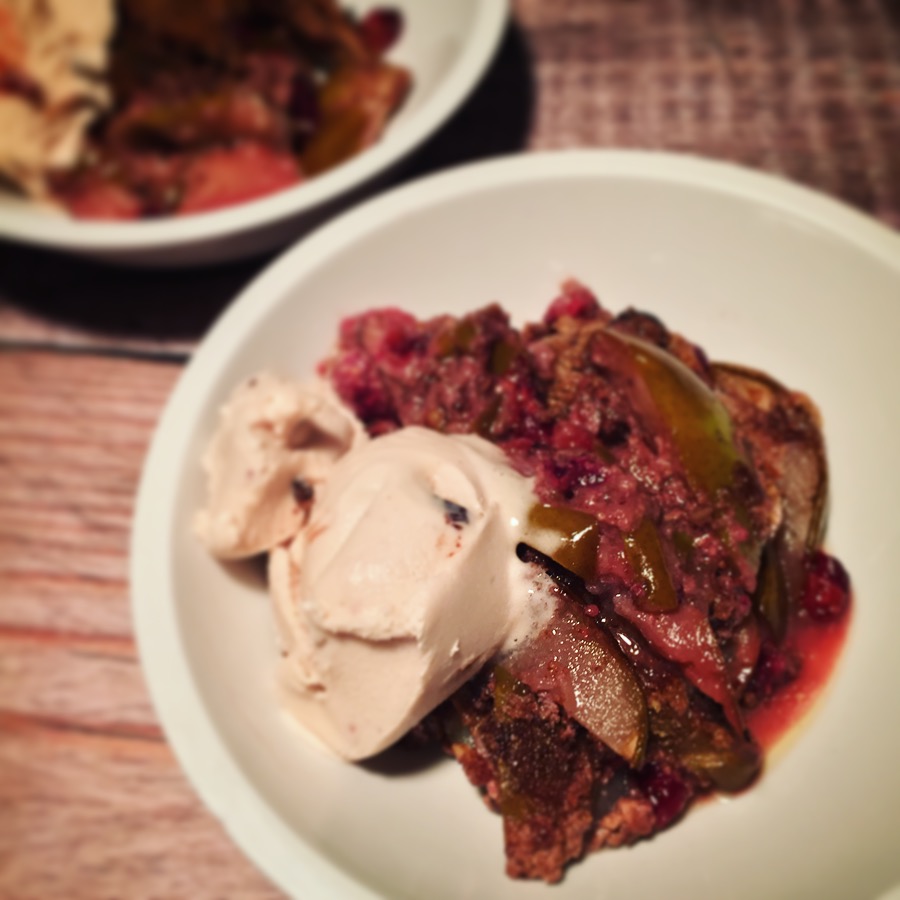 We are a participant in the Amazon Services LLC Associates Program, an affiliate advertising program designed to provide a means for us to earn fees by linking to Amazon.com and affiliated sites.

This site uses Akismet to reduce spam. Learn how your comment data is processed.

We use cookies on our website to give you the most relevant experience by remembering your preferences and repeat visits. By clicking “Accept All”, you consent to the use of ALL the cookies. However, you may visit "Cookie Settings" to provide a controlled consent.
Cookie SettingsAccept All
Manage consent

This website uses cookies to improve your experience while you navigate through the website. Out of these, the cookies that are categorized as necessary are stored on your browser as they are essential for the working of basic functionalities of the website. We also use third-party cookies that help us analyze and understand how you use this website. These cookies will be stored in your browser only with your consent. You also have the option to opt-out of these cookies. But opting out of some of these cookies may affect your browsing experience.
Necessary Always Enabled
Necessary cookies are absolutely essential for the website to function properly. These cookies ensure basic functionalities and security features of the website, anonymously.
Functional
Functional cookies help to perform certain functionalities like sharing the content of the website on social media platforms, collect feedbacks, and other third-party features.
Performance
Performance cookies are used to understand and analyze the key performance indexes of the website which helps in delivering a better user experience for the visitors.
Analytics
Analytical cookies are used to understand how visitors interact with the website. These cookies help provide information on metrics the number of visitors, bounce rate, traffic source, etc.
Advertisement
Advertisement cookies are used to provide visitors with relevant ads and marketing campaigns. These cookies track visitors across websites and collect information to provide customized ads.
Others
Other uncategorized cookies are those that are being analyzed and have not been classified into a category as yet.
SAVE & ACCEPT

What’s YOUR PCOS Root Cause?

Find out which root causes are driving YOUR PCOS symptoms